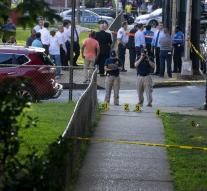 - The 35-year-old man suspected of being in New York to have shot down an imam and his assistant, is charged with manslaughter. That made the police announced shortly after the memorial service for the two victims. He is also charged with possession of a firearm, the purpose is to cause damage with it.

The imam Maulama Akonjee (55) and his assistant Thara Uddin (64) were buried Monday. There, hundreds of people came out, who gathered in a parking lot near the place where the duo Saturday was shot. The shooting took place after Mass at the Al-Furqan Jame mosque. All speakers at the memorial meeting stressed that the government should consider the murders as hate crime and that the police, the mosques and the neighborhood where many Muslims live, has to protect better.