Home / World / Imam cell due to call for support for IS 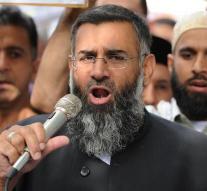 london - An Islamic cleric Tuesday in Britain was sentenced to 5.5 years in prison for calling for support to terrorist group Islamic State. That reports Sky News.

Anjem Choudary was found previously guilty of inciting support for IS. Followers of the man have been associated with terrorist acts or plans in various parts of the world.