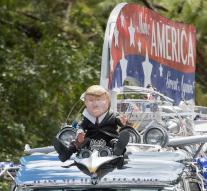 washington - The appearance of the United States in the world has fallen since the arrival of President Donald Trump. But 22 percent of the people surveyed in 37 countries have confidence in their foreign policy, according to a poll from the Pew Research Research Center in Washington. At the end of Trump's pastor Barack Obama's term of office, that was 64 percent.

But 16 percent supports Trump's plans for building a wall at the border with Mexico. In that country and other states in Latin America and Europe, resistance is high.

According to the poll, Trump only has confidence in Russia and Israel more than Obama. In Russia, confidence in the US president increased from 15 percent in January 2015 to 41 percent now.

Of all respondents, 55 per cent sees Trump as a strong leader. Many people also find him arrogant, intolerant and even dangerous.

For the survey, between February 40 and May 8 in 37 countries outside the US, more than 40,000 people were asked to give their opinion about Trump.