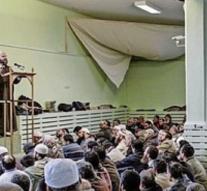 the hague - The Salafist Imam Fawaz Jneid no longer calls his Islamic bookstore his illegal mosque in The Hague. While the prayer house is hidden behind a large tarpaulin due to facade work, the text on the door is secretly polished.

The Qanitoen Foundation scratches back now that the municipality has resorted to a short trial because the controversial sheikh has spoken in the bookstore for months. This is forbidden because the Mayor Krikke property can only be used as a business space.

The imam himself says that the name has been removed because it does not cover the cargo: 'The municipality is always talking about bookshops, but the foundation also organizes social, educational and religious activities,' said Jneid.

In the premises itself, almost nothing indicates a bookstore: In the empty space, intended for women, there is only a table with a handful of plastic-wrapped books titled 'The Ideal Muslim Woman'.

Fawaz Jneid recently imposed an area ban on the Transvaal and Schilders district districts. Although the Friday afternoon prayer continues, since then, the number of mosque visitors has fallen back. According to the Sheikh, this is because many people come especially for him.