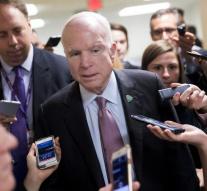 new york - The severely ill John McCain is going to keep the law 'Obamacare' alive for the second time. Republicans had tried to replace the law, but that attempt fails- and now finally.

That reports The New York Times. McCain's 'no' voice is striking on a personal level: the withdrawal of the law was an idea of ​​Republican Lindsey Graham, a major ally of McCain.

At McCain, newly diagnosed brain cancer was established. That has reflected in the decision, think colleagues. 'Man, he looks dead in the eyes, so probably he will not bow to political pressure,' predicted a senator this week.

Also, the first attempt to overcome Obamacare failed. Then it was expected that McCain would vote before withdrawal of the law. Donald Trump called him a 'hero' because he fled back to Washington specifically for the vote, supposed to say yes, but with all expectations he said 'no.'

Newspapers were full of: The 'most dramatic evening in Senate of recent history' headed the Washington Post. The Independent called it 'McCain's revenge on Trump'.

According to American media, Obamacare will now survive the Republican Furie for the second time.