Home / World / Ill in love with father of As 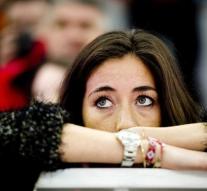 the hague - The 71-year-old stalker of the father of former hockey international Naomi van As has hit back. Last year Kim O. Stuck for three months, but after her release, she would have again provoked Francis van As again.

If there is already an average detainee, Kim O. does not fit into that box. The woman of age, who was active in her active life as a flight attendant and later as a lawyer, seems fragile. The slim Indian lady wears a long skirt in the sitting room on Monday afternoon, puts her black hairs and knitted a black scarf with white balls.

In September last year, she was sentenced by the court to four months of imprisonment (a conditional sentence) for staging the Hague's dentist Francis van As, the father of Naomi van As.

She wrote letters, mailed him, left voicemail messages and even stood on the sidewalk of the Van As family. The woman also signed a subscription at the gym which is located in the same building as Van As's practice. The woman was convinced she had a relationship with father Van As.

O. Van As met in 2007 on a course Mandarin (Chinese). According to attorney Ranesh Dhalganjansing, his client later only fell in love with the dentist when she heard that his relationship was no longer happening.

The messages sent by O. to Van As and the voicemails they left were, according to her lawyer, only messages with a loving touch. 'That she misses him, that nobody can drive them apart and with the announcement that she made a restaurant reservation, hoping he would come too. '

Francis van As was not served by her persistent attempts to increase her efforts and reported.

After the release of O. last year, according to the Public Prosecutor's Office (OM), she would again have fogged. Despite the ban, they kept calling.

They also visited their practice and left a package with a card. In addition, she would have bothered Naomi van As's uncle.

After a new declaration, the OM initiated a second criminal case against O. In October, the matter will be held. Since April, the 71-year-old woman is in forearm, tells her lawyer. 'She's really heavy. '

O. appealed against her conviction last year. Yesterday the case was dealt with non-substantively by the court of law in The Hague. 'I certainly had a relationship with him!', O. assured the court counselors. In the context of the second criminal case, O. has since been investigated by a psychologist and a psychiatrist. She would suffer from a mental disorder. If they are found guilty, then it is questionable whether her actions can be fully attributed.