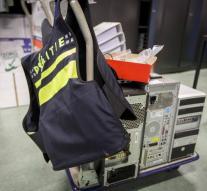 - The police in recent years mainly invested in stable making the ICT systems. The necessary renewal thereby running behind schedule. 'The advice is therefore as soon as possible to make room for renewal', the General Court wrote in a research report published Tuesday on the ICT in the police.

Police have in recent years been progress in the ICT field, the Court concludes. 'The two main systems, 80 percent support the police in the area of ​​enforcement and investigation are made more stable and slightly improved. 'The appreciation of agents who work with it increased slightly from a 5.9 to a 6.4 early last year early this year. However, 'It will be time for renewal of those systems,' according to the study.

The choice to stabilize the existing ICT infrastructure and improve, according to the Court 'is logical. 'But, warns the agency,' keeping in the air from existing ICT systems, which are outdated and need replacing, will become more expensive. '

For the period 2017- 2020, the police let already know 456 million to be available for additional investments in ICT. Thus there are according to the Court 'for the moment sufficient resources to fulfill the ICT ambitions. '

The NCA since 2003 follows the ICT developments in the police. The present study describes the situation this year and is a follow-up survey in 2011.