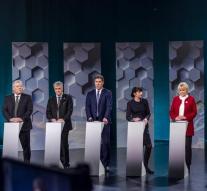 - The Pirate Party is Saturday chance with other opposition parties to win the elections in Iceland. According to polls, the opposition led by the Pirates will win more votes than the center-right government.

The hacker and anti-copyright activists founded party wants to fight corruption include grant asylum to American whistleblower Edward Snowden and the use of virtual currency bitcoin expand. The government parties indicate their successful economic policy: tourism flourishes and the economy is this year expected to grow by 4.3 percent. The ruling Independence Party is expected to remain the largest, but probably lose the majority that it is the Progressive Party with coalition partner.

The early elections Saturday were written after the scandal surrounding the Panama Papers previous Icelandic prime minister was forced to resign. Sigmundur David Gunnlaugsson and his wife turned millions have placed in family capital to an offshore company that had interests in Icelandic banks.

In 2013, the Pirates won three seats in the 63-member Althing, often described as the world's oldest parliament. Normally the turnout 80 percent high on the island, but as elsewhere, young people are more likely than other age groups tend not to vote. That can be a disadvantage for the Pirate Party.