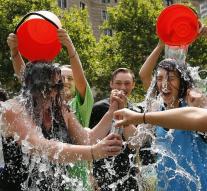 amsterdam - Thanks to the internet phenomenon of the ice bucket challenge has found a new gene ALS is linked to the disease. The discovery of the gene represents a breakthrough in research into the disease, experts say the discovery could lead to new treatment options.

The new gene NEK1 called, is found at only three percent of ALS patients, but experts say the discovery could eventually lead to new treatment options, the British newspaper The Guardian reported.

In the summer of 2014 Internet users were inundated with videos showing how people had contracted the ice bucket challenge. By emptying a bucket of ice cold water was drawn attention to the disease ALS. Then daredevils essentially had to do the same to others. When someone refused, the person had to donate to the ALS Association.


Countless celebrities did a donation, including Mark Zuckerberg, Bill Gates. In one month, the fund took a whopping 100 million euros.