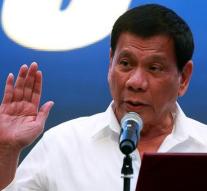 - The prosecutor at the International Criminal Court (ICC), the Philippines has warned that it may open a criminal investigation into the numerous extrajudicial executions of drug traffickers and users in the country. Chief Prosecutor Fatou Bensouda ' expressed serious concern 'about reports that more than 3,000 people in three months have been slain by security forces.

Statements of high officials ' appear to condone and encourage public bodies and citizens to further attacks these murders, '' said a statement issued Friday in the night of Thursday. Whoever incites masssageweld or participates in, ' can be prosecuted by the court, '' Bensouda warned.

Philippine President Rodigro Duterte performs a very hard war against drug trafficking in his country. Rights groups he let death squads have their way. The prosecutor at the ICC informed of developments in the Philippines to follow closely. The Philippines are members of the ICC.