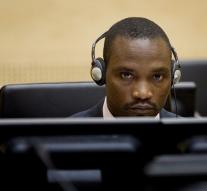 - The International Criminal Court (ICC) in The Hague shows one of the two men who have been convicted, the Congolese, Germain Katanga, in January released. The court on Friday said that he has been over two thirds of his sentence of twelve years in prison and is eligible for early release.

Katanga was a gang leader who has committed, among other guilty in northeastern Congo in 2003 and 2004 massacres of defenseless villagers and the use of child soldiers. He is therefore sentenced by the ICC in 2012 for crimes against humanity and war crimes. He was arrested in 2007 and transferred to the ICC.

The ICC was set up by many countries in 2002 for genocide, to try crimes against humanity and war crimes, when the country can not or is not done. The court spends around € 100 million per year but sentenced only two men, Katanga and his compatriot Thomas Lubanga Dyilo.