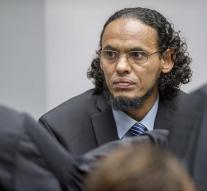 - The International Criminal Court in The Hague on Tuesday Ahmad al-Faqi al-Mahdi sentenced to nine years' imprisonment for destruction of cultural heritage.

The Malian jihadist was found guilty of destroying several mausoleums and a mosque in the city of Timbuktu in Mali.

It is the first time that someone has been convicted of such an offense. It applies officially a war crime.