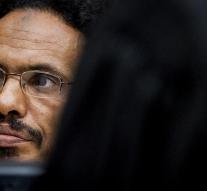 Mahdi was a member of the extremist militia Ansar Dine, which aims to introduce Sharia law in Mali. He would have been at the head of the morality police of the movement that forced upon Islamic law in Timbuktu in 2012 and 2013. He would also have been involved in the decisions and implementation of the Islamic court in the city.

Mahdi in March already admitted that he was involved in the destruction and declares himself expected to guilty Monday. ICC expects to have only a week needed for the hearings. The ruling follows a certain date not yet.