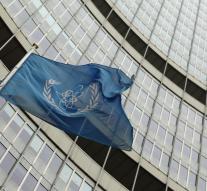 - The International Atomic Energy Agency (IAEA) ended after twelve years of research into the possible development of nuclear weapons in Iran. That report various media-based diplomats gathered in Vienna for a meeting of the UN organization.

In early December, the IAEA had found that Iran has done in the past, research into the development of nuclear weapons. But since 2009 is no more proof for this. Tehran has never come close to building a nuclear bomb. Closing the research entails the lifting of sanctions against Iran a step closer.