Home / World / 'I saw the truck flying through the air ' 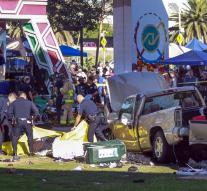 - A rarely seen accident Saturday (local) time made a dramatic end to the La Raza Run motorcycle festival in the Californian San Diego. Four visitors to the motor festival, which was held in a park under a large traffic junction, were buried under a pickup truck that plunged 20 meters down. The four did not survive, nine others were injured.

Eyewitnesses do in American media startled their story. 'I heard a bang and then I saw the car flying through the air,' said one of the visitors. 'I thought I would be hit, so I put on a walk. After the blow debris flew everywhere. When I got back, I saw people gathering around the car. Everyone had immediately that it was wrong. We could not do anything, it was terrible. '

Then arrived the emergency services, showed that four bodies lay under the truck. The driver survived the crash. He would have drunk.