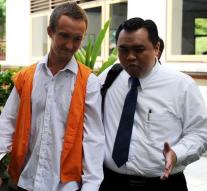 denpasar - Đại Heijn, on the Indonesian island of Bali on trial for drug trafficking, tomorrow hear the sentencing in his case. That should actually have to happen today, but the session was postponed for the second time.

Due to technical and administrative problems was the indictment of the prosecutor not arrived at the notorious Kerobokan prison, where Heijn held since mid-March. Therefore, the scion of the supermarket family could not appear in court.

Đại Heijn was arrested in Bali in January, after he received a package from Spain by post containing 224 grams of marijuana. He has lived a few years in the sunny holiday island, where he earned money by giving spiritual training and acted as an amateur comedian.