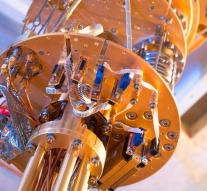 With a quantum computer to analyze large amounts of data, which is important for general scientific research. Heck (30) has devised a method, 'Coulomb-assisted braiding. Which causes certain particles can interweave on command. The technique can contribute to the design of a so-called Majorana-quantum computer. This method has already received a lot of interest from international research, reports the organization of the awards ceremony.

Heck gets 10 000, a certificate and a bronze statue. Christiaan Huygens science award goes annually to a promising researcher who has made an innovative contribution to the science. The prize was awarded at the Shell Discover Generation Festival, a multi-day event designed to make young people excited about science and technology.

The Huibregtsen Prize 2016 goes to Ronald Hanson of the Delft University of Technology for his research on quantum safely surf the internet. The award, which consists of 25 000 and a sculpture of 'The Thinker', annually goes to a research project ' is scientifically innovative and offers a view on a social application. '