Home / World / Hurricanes Maria and Lee on their way to Europe 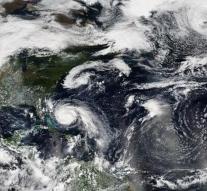 - This weekend, the (ex) hurricanes Maria and Lee on the Atlantic Ocean merge into a large and powerful low-pressure area. Monday, the depression will arrive near Ireland as a very heavy storm. It may even be a hurricane power.

The consequences for the weather in the Netherlands are very uncertain, according to Weeronline. Depending on the course of ex-hurricanes, it will be full autumn or it will be a little late summer.

Until Wednesday, Mary draws northward to the Atlantic Ocean, east of the United States, as a hurricane. Tuesday and Wednesday, North Carolina's coastal areas can hit tropical storms. On Thursday, Maria is included in the usual flow from west to east on the Atlantic Ocean.

On her way to the east, Maria will meet Lee this weekend. Lee is active as a hurricane until Thursday midnight on the ocean and bends Friday to the northeast. In addition, he fades into a tropical storm. Over the weekend, the two (ex) hurricanes meet each other and form one big low-pressure area. This depression then drives towards Ireland and increases its strength.

Although this low-pressure area is no longer comparable, a hurricane causes the remains of Maria and Lee for a lot of energy and also hurricane winds (12 Bft.) Are still possible. Making ex-hurricanes heading towards Europe is more frequent, but wind speed of hurricane power is achieved.

Uncertain weather forecast by the ex-hurricanesOf the low pressure area resulting from the remains of Maria and Lee will affect the weather in the Netherlands is still uncertain. The chances are that Ireland and Scotland will be in a hurry, but the exact rate of depression caused by ex-hurricanes is always very uncertain.

There are two scenarios for the Netherlands:

The low-pressure area draws northward between Ireland + Scotland and Iceland. In this scenario, above the Netherlands, a southern wind is applied which supplies (free) warm air and remains predominantly dry. A bit late so.