Home / World / Hurricane Maria on the way to St. Croix 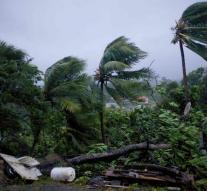 miami - Hurricane Maria is on his way to St. Croix, part of the American Virgin Islands. After discharging on Dominica and temporarily lowering, wind speeds up to 260 kilometers per hour have been measured again. Those belonging to the heaviest category 5.

The center of Maria is now 325 kilometers southeast of St. Croix. That has announced the National Hurricane Center in Miami on Tuesday. Maria then rides on the island of Vieques and Puerto Rico. Capital of San Juan, according to the prediction, is exactly on the route. The Puerto Ricans escaped the Irma devastating power two weeks ago, but the storm, heavy rain and high waves caused an estimated $ 1 billion damage.

Unlike Dominica, the south-eastern French Antilles island of Martinique has been gracious. How the situation in Guadeloupe, north of Dominica, is unclear for now. According to the protection of the population in Paris, the power has fallen out. Communication is almost possible.