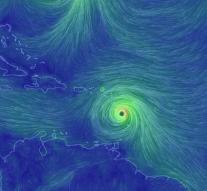 miami - The storm Maria has gained strength and is now a hurricane in the fourth category. Maria is now about 55 kilometers northeast of Martinique, reported the US National Hurricane Center (NHC) on Monday.

Maria is now accompanied by wind speeds of up to 215 kilometers per hour. The hurricane draws to the west north west at a speed of approximately 17 kilometers per hour, according to the NHC, which warned of heavy rainfall and storms in some areas.

A hurricane in the fourth of five categories is considered extremely dangerous. Several precautions have been taken in several islands in the area. Thus, the authorities opened at Puerto Rico shelters and cranes were demolished.

The Dutch authorities sent teams with marines to the islands of Saint Eustatius and Saba.

It seems that Maria goes by well to the south of Sint Maarten.