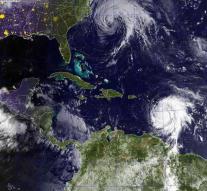 miami - The fourth major hurricane this year has hit the small island of Dominica. Hurricane Maria is in the fifth and heaviest category and reached the island on Monday morning at 4:00.

There are about 70,000 people living on the island. It is not yet known how big the damage is. The island's premier, Roosevelt Skerrit, knew that the roof of his house had been wiped and his house was flooded.

The hurricane pulls on to the British Virgin Islands and Puerto Rico on Tuesday.