Home / World / Hurricane José is heading off to New York 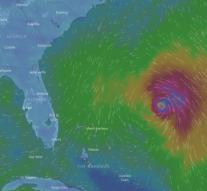 miam - The tropical storm José has again increased to hurricane power and is now moving very slowly in the north toward the Atlantic Ocean. US meteorologists expect the storm to hit the state of New York next week and then head towards Canada.

José is currently a hurricane of the lowest category 1. Friday, wind speeds were measured at 120 kilometers per hour. The storm area is now a little 800 kilometers southwest of Bermuda.