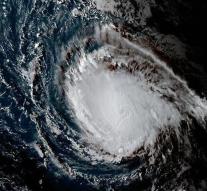 miami - Hurricane Irma has become a tropical cyclone of the fourth category. This is the second highest level of hurricane, with wind speeds of up to 250 kilometers per hour.

The course of the hurricane is still uncertain. It may be possible for Irma to pull along the Caribbean Sea in St. Maarten on Wednesday. Saba, Sint Eustatius, the Virgin Islands and Puerto Rico also need to prepare for the hurricane, which moves further west.

Perhaps this weekend, Florida will also face the hurricane. The governor of the state has proclaimed the state of emergency.

The United States was hit by Hurricane Harvey last month, which, for example, has caused $ 180 billion in damage in the state of Texas. Also, Harvey was a fourth hurricane just before he reached the coast.