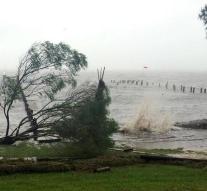 tallahassee - Florida has officially dealing with a hurricane. Tropical Storm Hermine was over the Gulf of Mexico so far increased in power that there is a hurricane, one category. Hermine is the first hurricane in over 10 years that affects Florida. Along the coast are areas of land under water.

Tallahassee, Florida's capital, according to weather maps seem to be significantly affected. The hurricane is moving in a north-easterly direction.

Americans place on Twitter several videos of the damage caused by the hurricane. In low-lying parts of Florida residents are required to wait elsewhere for the coming of Hermine. opened at various places shelters. The governor of Florida has 56 municipalities declared a state of emergency.