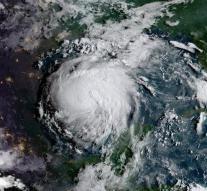 washington - Hurricane Harvey takes on strength in the run-up to the American coast. The National Hurricane Center in the United States reported Friday that the tropical storm has grown into a hurricane of the category two.

Millions of people are currently preparing for the storm, which may be one of the heaviest of the past twelve years in the US. According to the latest calculations, the hurricane will reach the mainland at Corpus Christi in the state of Texas on Friday (local time) on Friday, and then move further inland.