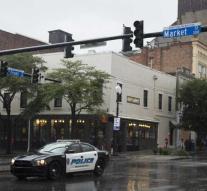 wilmington - The diminished, but still dangerous, whirlwind Florence goes ashore in the American state of North Carolina. The severe weather associated with the hurricane has caused flooding and other nuisance for some time. In more than 300,000 households in North Carolina the power has already failed, reported local media.

In coastal areas many streets have been flooded by heavy rainfall. Moreover, the high waves at sea ensure that rivers can not get rid of their water and step outside their banks.