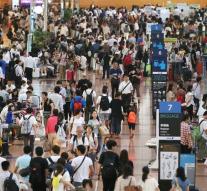 - As the train and traffic in Tokyo is shut down by the Japanese authorities in anticipation of the hurricane Mindulle, approaching the Japanese capital with great speeds. Gusts up to 180 km / h have caused to buildings much damage in Japan.

The hurricane is accompanied by very heavy rainfall, leading to flooding and mudslides. The 13.6 million residents of Tokyo are warned and tens of thousands of people living in the path of the hurricane, are advised to evacuate.