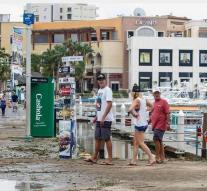 - Two dead and three missing, that was the sad result after Hurricane Newton had raged Tuesday over northwestern Mexico. The hurricane blew over the Mexican peninsula of Baja California and brought not only a huge storm of 120 kilometers per hour, but heavy rain with it.

Cabo San Lucas is a tourist area that is especially popular with Americans. But because it is tourist season, the hotel was not very full.

Two bodies washed ashore after the storm ashore. The two deaths were probably part of the five-man crew of a fishing boat. The Navy is looking for the other three crew members.


The Category 1 hurricane is on its way to the Gulf of California.