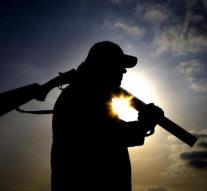 presov - Two hunters in Slovakia accidentally hit in each other's field of fire. A 37-year-old man survived, but it eluded his colleague. The shooter was vainly looking for his prey and concluded that he had missed.

The accident in the forest at Lukavica in the east of the country already happened on 9 July. Police Presov until Monday revealed the facts. The mortally wounded hunter stood for some time as missing. After the discovery of his body and rifle ballistics examination showed that the bullet had come from another loop. The offender may have to pay for his carelessness with imprisonment of up to three years.