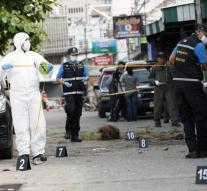 bangkok - The Thai police are hunting for the perpetrators of the bomb attacks on resorts in the south of the country. Two men, according to Thai media been arrested on suspicion of participating in the attacks, in which four people were killed and include four Dutch tourists were injured.

The police do not think that they should seek the perpetrators of an international terrorist group or the radical Islamic rebels fighting against the government in southern Thailand, but speaks of,, local saboteurs'. Their motive is clear, according to the police they would be out of chaos and unrest.

Possibly the police suspected supporters of former Prime Minister Thaksin Shinawatra, who have been sidelined by the junta. The military government Sunday received the blessing of the Thai electorate for the new constitution which it had submitted to them. Police Chakthip Chaijinda explained explicitly,, a connection with political developments '', citing Sunday's referendum.


Thai media also recalled that Hua Hin, one of the targets, the summer residence of the Thai king also is a symbol of the monarchy. Thailand celebrates precisely these days the birthday of Queen Sirikit.

The least ten explosions of the last day surpassed especially in tourist favorite places in southern Thailand. In those parts store radical Islamic rebels to regularly. they serve themselves, frequently also two homemade explosives that they with the aid of a mobile phone even after the other to explosion.