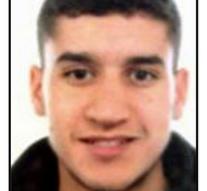 - Not Moussa Oukabir, but Younes Abouyaaqoub (22) controlled the white bus carrying a massacre on the Ramblas Thursday.

That is the increasingly firm belief of the Catalan police while the research is progressing. Abouyaaqoub is currently on the run. On Friday, the French authorities have been informed, because it is not excluded that he has crossed the border.

At first, the police thought that it was Moussa Oukabir who was driving the bus that hit at least one hundred people as he drove zigzagend over the Ramblas. But the investigation has not been completed yet, and in the course of last night, this hypothesis became less and more likely for the Catalan police. 'It's a possibility, but it's getting less likely,' said police chief Joesp Lluís Trapero. In the night, the police became known to be looking for Younes Abouyaaqoub as principal father. The police came to this conclusion after hearing many witnesses who saw the driver of the bus flee away.

Younes is 22 years old, and also comes from Ripoll. Yesterday the police still thought he might be dead, just like the five who were shot by the police in Cambrils on Thursday night. But now he is in full swing. Not only has his signal sent to France, the surroundings of Girona and Barcelona are also embraced.