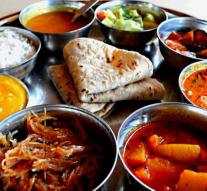 delhi - A sixty-year-old Indian shot his wife because food was late on the table. Ashok Kumar came drunk at home in Ghaziabad and was quarreled with his wife, a police officer told the BBC on Monday. He would have shot her on it.

The woman, 55, was upset by police over the continued drinking of her partner. 'She wanted to talk about it, but he wanted to eat right away,' said the police officer. 'He was frustrated by the delay and shot her down. 'The police arrested Kumar. He knew his wife had shot dead and expressed regret.

Domestic violence occurs relatively often in India: in 2015, every four minutes reported in the country with about 1.3 billion inhabitants. Government inquiries revealed that 54 percent of men and 51 percent of women find that a man may spell his wife, for example, if she does not show respect for her in-laws or neglect her home and children.