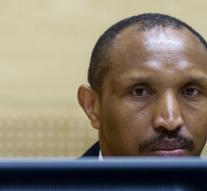 - "The Rwandan warlord Bosco Ntaganda, on trial before the International Criminal Court (ICC), continues his hunger strike in his cell in The Hague. He left the judges Tuesday that he " is ready to die. ' He was not in the courtroom because he was too weak for that."

"The 41-year-old Ntaganda has been indicted for crimes against humanity and war crimes in northeastern Congo in the first years of this millennium. He is held responsible for, among other killings and rapes, and there would be sex slaves and child soldiers are held to."