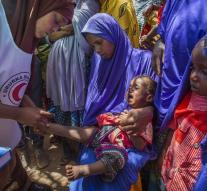 rome - After a steady decline over ten years, the hunger in the world increases. Last year, 815 million people starved 38 million more than in 2015. According to a joint report from five United Nations organizations, the increase is mainly due to conflict and climate change.

In Asia, 520 million people are hungry and in Africa 243 million. About 155 million children under five years still have malnourished growth due to malnutrition. They are often too short for their age or too light for their length. In this group there is still a steady improvement, but Unicef's Victor Aguayo does not go fast enough.

Half of the people who have too little to eat stay in crisis areas. Armed conflicts have increased dramatically since 2005 and became more complicated. For example, in South Sudan, northeastern Nigeria, Somalia and Yemen, there is a risk of starvation. 'We can not afford to ignore the alarm bubbles for a longer time,' said the authors of the report.

Not only in areas of war, food supply has deteriorated. Changing precipitation patterns by El Niño led to drought or even floods. An overall downturn in the economy is also debating the deterioration. Progression is mainly due to improving the diet for women and children and by improving the position of women in society.

However, worrying is also the increasing number of overweight children, currently 41 million. 'Obesity is a growing problem among the poor due to poor diet and an unhealthy lifestyle,' said Aguayo.