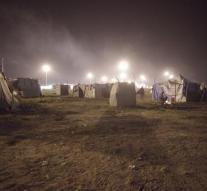 budapest - Hungary goes to the polls Sunday to speak out against the recording duty of refugees, as agreed within the European Union.

'Do you want the European Union even without the consent of Parliament may prescribe the mandatory establishment of non-Hungarian nationals in Hungary?', The question is to answer the voters. Main protagonist of a 'no' Prime Minister Viktor Orbán, which boosts the anti-foreign sentiment in the country with his campaign.

Hungary was last year at the center of the European refugee crisis, when every day thousands of asylum seekers flooded the country and created a refugee camp at the main railway station of Budapest. Orbán called the inflow a halt to the construction of a fence on the southern border.

According to the agreement would have to include Hungary in 1294 refugees.

At least half of the voters have to show up to make the referendum valid. The result is not binding.