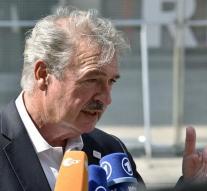 - Hungary would temporarily or possibly should be permanently excluded from the European Union because of the attitude of the country towards the refugee crisis.

Which has ruled the Luxembourg Foreign Minister Jean Asselborn, in an interview with the German newspaper Die Welt.

According to Asselborn is the only way to guarantee stands for the shared values ​​which the European Union. We can not accept that harm the fundamental values ​​of the European Union, said Asselborn. Whether it is for Hungary, which builds fences against war refugees or countries that harm the independence of the press and the judiciary. Such countries have temporarily or if need be put permanently out of the EU.

The Luxembourg minister advocates to change the rules in the EU so that there is no unanimity among the Member States to take such steps.