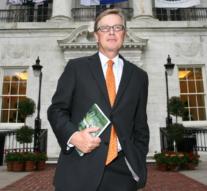 the hague - Hungary has recalled his ambassador to the Netherlands after criticism by Dutch ambassador Gajus Scheltema.

The Hungarian Foreign Minister responded to Mr Scheltema's statements. He had critically commented on the right-wing government of Prime Minister Viktor Orbán in a farewell interview. According to Minister Péter Szijjártó, Scheltema has exceeded limits.