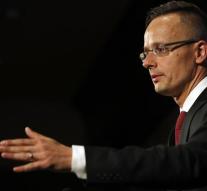 budapest - The Hungarian Foreign Minister has reacted badly to statements by Dutch ambassador Gajus Scheltema. He had critically commented on the right-wing government of Prime Minister Viktor Orbán in a farewell interview. According to Minister Péter Szijjártó, Scheltema has exceeded limits.

The Hungarian minister is 'pleased that the Dutch ambassador goes home. 'Scheltema is no longer welcome in the meantime, various Hungarian media Szijjártó quoted.

Steen van stotenot is a comparison that Scheltema opposed to page 168 Ora between the way in which the Hungarian government creates an enemy image and the way extremists do that.

Western European politicians are increasingly critical of the Orbán government. Regularly accusations of authoritarian action and the erosion of the rule of law. However, according to Szijjártó, Scheltema made it upset.

Due to the late date, the Ministry of Foreign Affairs did not immediately have the opportunity to respond.