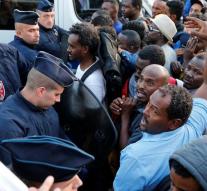 geneva - Nearly one hundred thousand migrants worldwide have returned voluntarily to their country of origin via a special UN program last year. More than half of them left home from Germany, the International Organization for Migration (IOM) reported on Tuesday. The migrants received help from the United Nations on their return journey.

The majority of migrants chose a return to their own country after their asylum was refused. A quarter of the number of refugees is underage, including 1250 children who travel without parents or escorts.