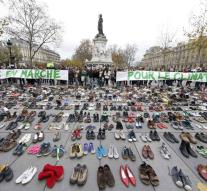 - At the Place de la Republique in Paris, hundreds of pairs of shoes of people who were planning to demonstrate Sunday in the French capital. Authorities in France have imposed a ban on demonstrations after the attacks in Paris two weeks ago.

Amélie Cornu of the activist movement Avaaz told the newspaper Le Figaro that there are between 13 000 and 15 000 shoes are collected in and around the French capital. That there were too many to put in the square. The activists want the shoes action urging government leaders to take concrete steps for the climate in the climate conference that begins Monday in Paris.

His Sunday demonstrations held in various cities and planned. Tens of thousands of people in Australia have taken to the streets to call attention to the climate. There were also demonstrations in Bangladesh, South Korea and the Philippines. There are demonstrations planned in the cities of Berlin, London and Amsterdam.