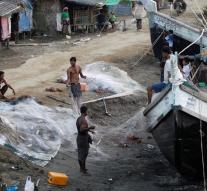 - Hundreds of Rohingya Muslims in Myanmar have fled to neighboring Bangladesh to stay out of the grip of the Burmese army. In recent days there has been heavy fighting between the army and Rohingya Muslims.

An army spokesman said that certainly 130 people were killed by the violence. Bangladeshis showed Wednesday that several Rohingya Muslims were gunned down when they tried to stabbing the river Naf between Bangladesh and Myanmar. Others were stopped by Bangladeshi border guards.

The fighting of recent days are the result of an attack on October 9 at three border crossing points on the border with Bangladesh by militants. In addition, nine policemen were killed. The militants were Rohingya Muslims.

Human rights groups say the Rohingya are already marginalized and persecuted for decades. The Myanmar government leader Aung San Suu Kyi said earlier this month that possible human rights violations be investigated by the military to the bottom..