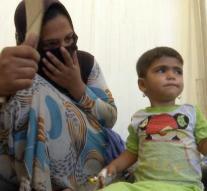 mosul - Hundreds of people have incurred food poisoning in a refugee camp east of the Iraqi city of Mosul. A woman and child did not survive. 'It's tragic that this happened to people who have been through so much,' said a UNHCR UN spokeswoman.

More than three hundred people had to be transferred to hospitals after the iftar, the first meal after sunset for Muslims who observe the Ramadan. Refugees began to surrender or fall due to rice, chicken, yogurt and soup, according to an Iraqi parliamentarian.

According to the IOM, the International Organization for Migration, a Qatar aid organization had enabled a local restaurant to cater for food. Other organizations could not confirm that. There are about 6300 people in the refugee camp. They have fled in many cases for the struggle in Mosul.