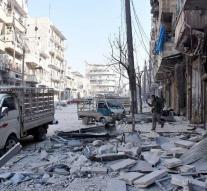 aleppo - The last 24 hours have once again many rebels in the Syrian city of Aleppo surrendered after Saturday already reported that some 1,200 rebels had laid down their weapons to the Russian Defense Ministry. There have emerged Monday 728 rebels, according to the department.

According to the Ministry fled since Sunday 13. 346 civilians by rebel controlled area in Aleppo, which is still under further pressure thrown into question by government forces. In the night from Sunday to Monday had to cede the rebels another district in eastern Aleppo, the Syrian Observatory for Human Rights reported.

The United States and Russia are now talking about a safe retreat of rebels and civilians. Sunday both countries have made a joint proposal, but they could not agree on the details.