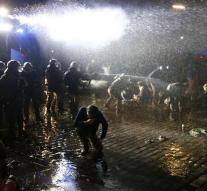 hamburg - The violent protests around the G20 summit in Hamburg caused at least 476 police officers to be injured. That score brought out the police in the city on Sunday.

The summit was closed on Saturday with a joint closing statement, which the police hoped for at the end of the irregularities. Nevertheless, rioters pulled a few hours after the end of the Hamburg summit, leaving again a tragedy of destruction. In addition, the protesters bombed police officers with bottles, fireworks and other objects. Rather, robbers robbed shops and stalled cars on fire.

The left-wing group in Hamburg's city council has demanded an investigation into the riots on Sunday. Chancellor Angela Merkel promised the victims Saturday a compensation. Research must identify who has become affected and to what extent.