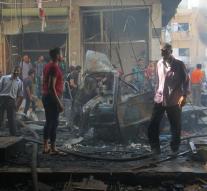 - "The death toll from air strikes in northern Syria, the day before the start of a cease-fire, has risen to a hundred. This was reported by the Syrian Observatory for Human Rights Saturday."