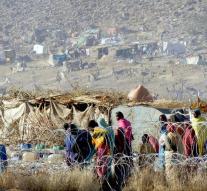 darfur - Amnesty International says convincing evidence that the Sudanese government to have chemical weapons bet against its own citizens in the war that has now lasted for more than ten years. Especially babies and children were victims of here. Amnesty International has estimated that between 200 and 250 people deceased as a result of attacks with chemical weapons.

The human rights organization said Wednesday that she has spoken with hundreds of survivors of the attacks and with experts of chemical weapons. There are many pictures of victims with serious injuries studied. All of the studies show that there are about 30 attacks have been in the area of ​​Darfur since January this year. The most recent attack was on September 9th.

Chemical weapons have been banned for decades, precisely because they have horrible painful consequences for the people that come into contact.