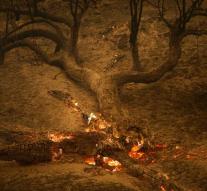 - Hundreds of people have been evacuated in the US state of California because of a hefty bushfire raging about 60 kilometers northwest of Los Angeles.

The fire broke out Friday near the town of Santa Clarita. According to the nearby Angeles National Forest is the heath fire Saturday night (local time) grown to about 8,000 hectares. The wind is blowing the fire towards populated area.


Least 300 people have been evacuated and some 1,500 people are advised to leave the area. The fire is 900 men on the ground and tries deployment of helicopters and fire fighting aircraft to control the fire.