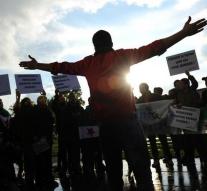 moscow - The 'humanitarian pause' to be awarded the people of Aleppo Thursday by the Syrian army and ally Russia is three hours longer. That the head of the Russian general staff, Sergei Roedskoi, said Wednesday. Earlier it was announced that there would be no bombs between 8:00 and 16:00 on the areas controlled by rebels in the east of the city. The file now expire at 19:00.

Aleppo was Tuesday also been relatively quiet after days of heavy shelling and bombing. Which made many civilian casualties, including children.