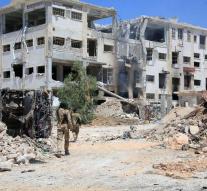 moscow - Russia and Syria begin a humanitarian relief operation in the Syrian city of Aleppo, which held a long period of rebels. Commissioned by the Russian Defense Ministry Thursday to know. It includes the idea that citizens who wish to leave the city, could do through three corridors.

The International Red Cross (ICRC) would guarantee that residents are protected and helped, regardless of whether they leave or stay. The warring parties must allow aid agencies access to determine which civilian populations in need and to ensure that families who want to leave to stay together. The plan also provides a safe passage for rebels who want to surrender.

The United Nations is surprised about setting up humanitarian corridors.,, We are not consulted, '' said the UN special envoy to Syria, Staffan de Mistura, Thursday told journalists in Geneva. For a further review he would first wait for more information from Russia. According to observers from helicopters dropped leaflets in the rebel neighborhoods in Aleppo, where the escape routes are indicated. But the population is still cautious, said an activist.


The ICRC is hoping to get access to the heavily besieged districts of the city.,, What we need most urgently is a humanitarian pause in all parts of Aleppo who suffer from the violence of war, '' said regional director Robert Mardini.,, Our teams need as soon as possible to the most vulnerable, including families, the elderly, the sick, wounded and prisoners. ''

Meanwhile, De Mistura confirmed that Russian and US military experts in the days to discuss joint plans in Geneva.