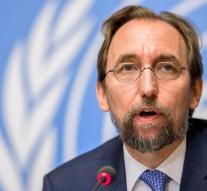 geneva - The United Nations Human Rights Chief is surprised by the persistent criticism of Donald Trump on journalists. High Commissioner Zeid Ra'ad al-Hussein called it 'quite amazing' that the American president 'attacks' the US President.

Zeid said at a press conference that press freedom 'is not just a cornerstone of the US constitution, but also absolutely something that the United States has defended for years. 'He pointed out that Trump's remarks about the media could count on rage.